I had the opportunity to hang out with Joe Goodwin tonight and pick his brain about mastering music.  Joe is the owner and mastering engineer at Bellwether Mastering, and he's mastered literally thousands of songs through the years.

As you would expect, the equipment he is running your audio signal through is top of the line.  The one that blows my mind most is his Shadow Hills Mastering Compressor.  This is a five-figure mastering compressor and I am happy to say it was used in the mastering of one of my own recent releases.  He usually bypassess the optical compressor and does most of the work with a slow attack and fast release through the solid state compressor, after which he drives the output transformers hard to increase harmonic content.  Of course, this is only one part of his mastering process and I can't give up all his secrets.  But let's at least take a look at the unit itself...

Here is the SHMC in action: 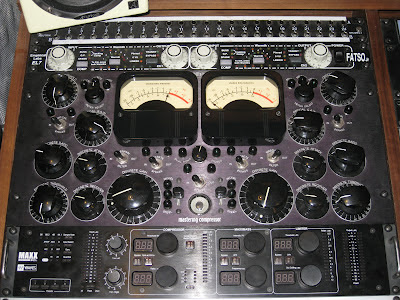 The serial number on the back of this thing is 63.  Yes, as in he got one of the first one of these ever made, custom-built and hand made by the original manufacturing team.  This is so cool I am not even sure where to begin.  Let's just say that this is a great purchase, and even if you had unlimited resources and could afford a Fairchild 670, it might not be worth it if you've already got one of these.  Shadow Hills designed this thing for very musical harmonic content and transparent transient control, and that's exactly what you get.
PS, fun fact: The lights on this Shadow Hills are all green, but the very first ones were multi colored.
What else is in the studio?
He's working off of two screens, one being a large flatpanel as you can see in this picture.  He has several pairs of monitors, including some nice cans (headphones!), and more analog equipment than I plan to list at this time.  His onboard software plugins and cards are also impressive, and I was fortunate enough to get the down-low on them from Joe earlier tonight.  Most importantly, the room boasts some really great acoustic treatment, and especially the low end monitoring is rock solid.

Let's take a little closer look at the screen.  It's my song! 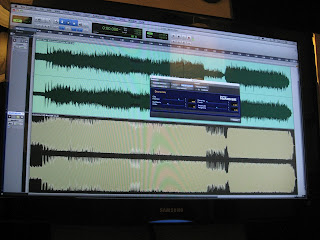 The top waveform is what I recorded and mixed down in my home studio, whereas the bottom waveform is Joe's final master.  Visually you can see that he's managed to get the song much louder.  Considering the mixing work was done mostly in the digital world, I was very satisfied with the analog character Joe managed to add in during mastering.

To end this brief tour of Capricorn Mastering P1, feel free to check out the short video below to get a better idea of what the room looks like on the whole.


Thanks and stay tuned for Capricorn Mastering - The Tour P2.
By Creative Edge Music at 12:15 AM