Let's explore and understand what this effect does and what it sounds like using an electric guitar track as a sample.

Please feel free to click here to quickly DL a zip file of all audio samples used in this post.


The Haas Effect is most commonly used to add a sense of depth and stereo quality to a mix. It is also used often times in place of double tracking or when someone wants to fill out a mix without using a standard delay or reverb.


The Haas Effect is most commonly used on guitars (but works on other sources, too).  The way it works is you pan an original track hard left, for example, and then sequence up a delayed version of the track panned hard right.  The delay time must be between 1-35ms for the trick to work.  Here are some quick samples for the sake of comparison:

Below I've posted some screenshots and described the settings for C, our Haas track.  I'm using Pro Tools 10, by the way, and the plugin I'm using in this example is AIR Dynamic Delay. 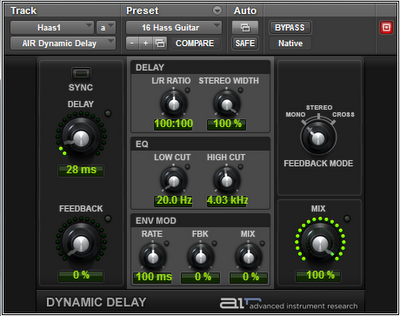 3. Delayed copy was also low-passed around 4k (LPF).
(Cutting off the delayed track above 3-4k enhances the effect of the sound coming from the speaker where the original track is panned, and helps with mono summation by eliminating phase problems in the high-mids/highs.)


You can see what
it looks like in my
mixing window
as well:

The biggest factor with acheiving the Haas effect is delay time, which you can't set over 35ms lest you want it to sound choppy, unpleasant, and obvious.  The general rule is, the lower the delay time, the more transparent the effect (the harder it is to spot), but also there will be more combfiltering with lower delay times and more difficult summation to mono. My preference is to use delay times in the 20-28ms range, but it depends on the situation.  In Roey Izhaki's book, Mixing Audio, he even suggests experimenting with modulation of the delay time with low rate and low depth to give richer impact and bigger size to the effect.

Here are some more examples of what the effect sounds like when we tinker with some of the settings.  In each case, the parameters refer to the delayed track, not the original track. (I.e., 28ms -5.8db LPF means the delayed track was delayed by 28ms, reduced in volume compared to the original by 5.8db, and low pass filtered at 4.03k).  I've highlighted in bold what changed from our original Haas track of 28ms -5.8ms LPF (example C above).

D. Guitar (With Haas Effect) 28ms -5.8db (No LPF)
Without the low-pass filter, the effect sounds a little more bright and full by itself.  However, low-passing the delayed track is generally good in mixing situations because it frees up room for other mid and high frequency content, in addition to solving mono compatiblity problems ahead of time.

E. Guitar (With Haas Effect) 28ms 0db LPF
Here we've taken the delayed track up to the level of the original.  Might be useful in situations where you've only got one guitar in the whole band.

F. Guitar (With Haas Effect) 28ms orig track -5.8db LPF
In this case, it is our original track that is lower in volume than the delayed track.  This creates a somewhat confusing, but potentially interesting and useful mixing tool to experiment with.  Just don't put the delayed track more than 10db higher than your original or you'll lose the effect entirely.

G. Guitar (With Haas Effect) 2ms -5.8db LPF
At 2ms, we get a somewhat pleasant combfiltering in stereo, and the effect is rather transparent.  However, summation to mono is somewhat compromised, and even the stereo tone is affected.

H. Guitar (With Haas Effect) 13 ms -5.8db LPF
At 13ms, the effect is still rather transparent but with less mono problems and a little bit more appeal in my opinion.

I. Guitar (With Haas Effect) 21ms -5.8db LPF
At 21ms, the effect is becoming less transparent but we are also finally escaping some of the combfiltering.

J. Guitar (With Haas Effect) 34ms -5.8db LPF
At 34 ms, the effect is at the brink of almost not working anymore, but this does sound really fat and full without much comb filtering.  You can almost hear the delay working though, so this may not be appealing especially if you push the fader up on the delayed track if you want any transparency.

K. Guitar (With Delay Effect) 40ms -5.8db LPF
At 40ms, this is no longer the Haas Effect!  We are now simply going to refer to it as a delayed track, because over 35ms the effect doesn't work - it doesn't fool your ears anymore - and it's too obvoius that there's another track playing on the opposite side of the stereo field.
By Creative Edge Music at 10:00 AM