I recently picked up a Marshall 1960A 4x12 Guitar Cab that was missing a side handle.  The guy who sold it to me on craigslist was nice enough to order replacement handles as part of the deal, and I was looking forward to installing them for the past few weeks.  Finally, today I went over to my father-in-law's shop and made it happen.

Marshall has been using plastic side handles on these cabs as a matter of routine for years and years.  Since they use plastic, it's no surprise that they break often.  Plastic simply can't hold up to heavy road use and abuse like metal.  In fact, today I went to another guy's house from craigslist to check out another 1960A with the same issue -- a missing handle, on the other side of the cab compared to the one I purchased a few weeks ago.  Funny how these iconic guitar cabs, loaded with the well-known Celestion G12T-75 speakers and all, staples of rock and roll for ages now, have brittle plastic handles installed from the get-go.  But whatever -- gear is made to be played with and improved, and that's just what I'm in the process of doing to my new baby. 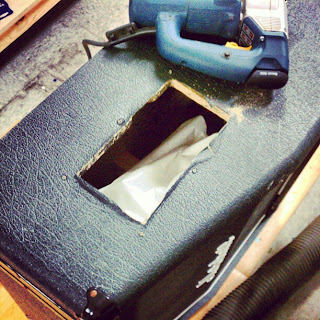 When I first demo'd my soon-to-be 1960A, I did notice a loss of definition due to the missing handle.  Especially when cranked, and especially in the low end -- presumably the hole was acting like a really poorly constructed bass port with a janky resonance, but I wasn't concerned that there were any fundamental speaker or cabinet issues affecting the sound.  Surely enough, now that the new handles are on there and the gap has been plugged, the soundscape is noticeably tighter and more defined.  And of course, it still has that classic and beautiful Marshall breakup and richness that comes with driving it hard with an all-tube amplifier.

The process of putting the new handles on was a little tricky, though.  The new handles came from www.speakerbuildersupply.com, and the link to the specific ones I used (SKU: BHSLG, $10.99 for the pair) can be found here.  As it would turn out, these all-steel replacement handles were just a hair too long to fit in the pre-cut hole where the plastic handle once resided.

The practical solution was to use a jigsaw to cut out about 1/8" more space on the lower side of the hole.  We placed a little bit of sticky paper in the hole prior to sawing to catch the sawdust, and it ended up being a surprisingly clean job.  Not to mention quick, too.

Step 2: Use a Jigsaw to make way for the new handle.

To go on a bit of a related tangent, I think most guitarists would agree that sound quality should be the most important consideration when purchasing a guitar cab.  One of the big factors here is the type of speakers inside any particular cab.

When I originally decided to grab this 1960A from my pal on craigslist, the missing handle made it convenient for him to look through the hole and check the date code on the speakers without having to pop the back off.  According to the date codes, my cab's G12T-75 speakers were made in mid-1993.  For reference purposes, you can find a date-code chart on Celestion's website.  This was important to me because I had done some research on the matter and determined that I wanted a cab specifically from this era with these speakers.

There are differing opinions about the quality of the G12T-75's through the years, but generally speaking a lot of people think they're great for rock, hard-rock, and metal. Also, many people seem to really like the 80's and early 90's G12T-75's.  I must admit that I am part of this crowd, if for no other reason than the fact older speakers tend to be more broken-in.  I think there's also a certain history that comes with aged gear, and I find myself wondering what gigs my equipment was used at, who played through it, what music it was used for, and so on.  But before I get too sentimental, there's another functional reason many people think the 80's and early 90's runs of the G12T-75's were better: they are UK made and assembled.  By contrast, the newer ones are Chinese.

Whether or not the UK versions actually sound better...well, some swear by it while others claim cork sniffing and snake oil.  I tend to side with the die-hards that believe the English-made models sound better, and on the other side of the fence, Celestion stands behind their newer products and believes QC is even higher at the new factories than it was in England.  Regardless of what side of the fence you might be on, you should know that plenty of guys who have owned both UK and Chinese G12T-75's indicate there's no audible difference either way.  Fact or fiction?  You tell me.

Celestion was acquired by a Hong-Kong company called Gold Peak in 1992. Gold Peak also acquired another British company at the same time, KEF Audio.  After doing some cursory research, I'm not sure if my 1993 speakers have parts from China or England, but I could see it going either way.  In this forum thread, a poster named gunboatstudio indicates that "for a while" (after the acquisition), the speakers were assembled in the UK but with Chinese parts.  Then again, I've also heard of Celestion sending certain UK-made parts to China for assembly.  Either way, it seems intuitive enough given the Celestion takeover in 1992.  After all, it would make sense that Celestion would've started utilizing their Chinese resources in some form or another soon after Gold Peak's entrance.  Still, even if this is true -- I like to think there was a lag time before the parts started being made in the far east.  Whether or not I missed the cutoff, if there even was a cutoff, I'm quite satisfied with my 1993 speakers.

By the way, here's what Celestion had to say about the matter at some point during 2003:

Q:Where are the current Celestion speakers manufactured (England or China)?
A: CELESTION COMMENTS ON COUNTRY OF ORIGIN FOR MANUFACTURING
Celestion has been manufacturing products in the UK since 1924. Nearly 10 years ago, Gold Peak, a Hong Kong based company, purchased Celestion and Kef in the UK. Gold Peak is a large manufacturer in the Far East and builds for JBL, Fender, QSC, Samson, and many others.
Their factories are first rate and in fact, do not offer the typical low cost manufacturing for which China is known.
In the last few years, Celestion determined they would need to relocate from their site in Ipswich as the factory was very old, run down, and inefficient. Looking in the UK, Europe, and the Far East, it was evident that using the existing company facilities in China was the best alternative to keep up with record demand levels and continue to match performance. Earlier in 2003, Celestion began moving most production to China. The products still manufactured in the UK, in a brand new facility, include the AlNiCo Blue & Gold, G12M & G12H Heritage, and all Neo Products, including Century/Century Vintage/ BL Neo. Celestion doesn’t manufacture piece parts in this factory, so the paper cone assemblies could very well still be sourced from the original supplier in the UK. That is simply a supply chain decision. The early boxes coming out of China were not always marked with the county of origin, current production boxes should be clearly marked now as to country of origin.
In November 2003, Celestion flew the editors from most of the major Guitar and Music Trade publications to the UK to outline their manufacturing strategy and give them a preview of the new Celestion speakers. We should start seeing the articles in print by January 2004.
Celestion’s experience with the actual performance of the Far East product has been excellent. In fact, they’ve reported a more consistent result driver to driver across production runs. Their “blind tests”, with all of their major OEM customers have been successful, and Celestion’s business continues to grow at record levels. It's important to consider that Celestion did NOT go to an outside contract manufacturing company for production (like some other speaker manufacturers) – they used an existing company owned facility in China that had been making the Truvox range of lower cost guitar speakers for years.

That's all for this one folks.  Feel free to chime in if you have comments or want to take sides on the UK vs. China debate.
By Creative Edge Music at 10:00 PM