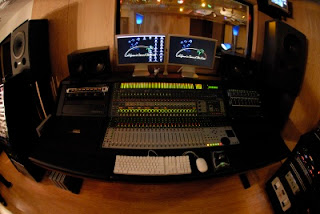 This past weekend I met up with Dustin Lees of California Sound Studios to talk about Production.  In no particular order, Dustin has worked with and mixed down the music of Wu Tang Clan, Korn, Snoop Dogg, Outkast, and more.  Over the course of many years, he has been at the heart of the Production process, and it was a real pleasure to talk through everything with him.

To put it simply, Production is the meat and potatoes of recording, because it really encompasses everything in the recording process from having nothing to having a finished CD (or EP, or single).

Say you’re in a band that currently practices twice a week and plays a few shows per month.  You have a rough demo that you made on your own, but you want to take things to the next level.  The obvious next step is to hit up a pro studio and get some tracks recorded – an EP is common for musicians and groups without financing, since you’ll be looking at 4-5 songs most of the time.  However, if you have the budget and the material, you might even consider getting a full CD made with 10+ tracks.
The moment you start thinking about this process, Production has begun.  You have transcended from “I practice and play here and there” to “I’m going to Produce some polished material.”

Production is over when you have the CD in your hand and you’re listening to it in your car, happy with how it turned out and thinking back to the great memories you made in the production process.

What about everything in between, like arranging, tracking, figuring out tempos, recording, mixing, and mastering?  This is what Dustin and I talked about at length.

Pre-production is really where things start happening.  (And unlike pre-partying, which is essentially the same thing as actual partying… pre-production really is its own phase.)

Pre-production is the most important part of the entire Production process because this is where all the planning and strategizing occurs.  This is where tempos are decided upon, where you decide to place the beat, where you develop a vision of how the vocals will fit into the mix (as well as the other parts), and where you ultimately create a final vision of what you want track by track. 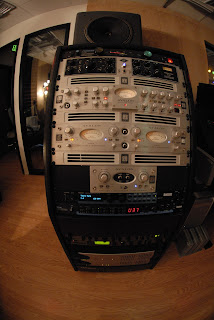 Dustin estimated that he spends 2 hours in Pre-production for every 4 hours of studio time (recording, mixing, and mastering).  This is where timelines are created, song structures are mapped out, tempo changes are noted, key signatures are written down, and so on.  The point is to get the artist, the production team, and the engineers all on the same page before hitting the record button.

Once all of this Pre-production planning has taken place, actual Production is scheduled.  Namely, this means tracking and mixing.  For a hip-hop or rap type artist, it’s common for the backing tracks (beat, synths, etc.) to be done already, leaving just the vocals and any layovers left to be done.  Sometimes, though, all parts are recorded or produced through the studio.

In situations where artists bring in their own backing tracks, sometimes they’re already up to studio-quality par; other times they aren’t.  If not, then no problem – Dustin might re-track the parts through his own plugins, he might add certain effects/processing or layers, or he might throw some compression and harmonics processing on there to get levels and sound quality just right.

By the way, a lot of this up-front processing is done in the back room of CA Sound Studios.  Among many other things they have back there, I managed to jot down that they have a Vestax 1200 and C07 linked up to a Traktor; a UA Apollo interface linked into their MacPro, which comes with Neve plugins; a Bluetube Dual Pre; and both Pro Tools and Logic.  The UA Apollo has 8 ins and 8 outs, by the way.

Then, Dustin uses the following formula to keep an efficient workflow.  (This mostly applies to live band situations, not so much hip-hop/rap, but it all depends on the artist and the instruments involved.)
During tracking, Dustin told me one of the most important things you can do is to maintain good and positive communication with everyone in the room.  This means artists, producers, engineers, A&R guys, family, friends, and even the dog (if you have one!).  Vibe is very important and can either make or break a recording session; similarly, communication style is important to artists in particular.  After all, they’re bringing a piece of themselves into the room, ready to share with the whole world.  What they hear about their work can alter their moods for better or worse, and if anything, you want it to be better.

According to Dustin, “One of the most important things is keeping a really positive and creative atmosphere the whole time, and make sure it doesn’t seem like you’re solving problems.” 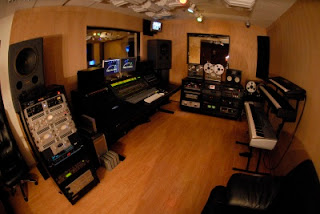 Instead, you must choose to see it as though they could do better, because you know their potential.  This isn’t just studio BS either, this is true – and part of the recording engineer’s job is to stay in constant communication with the artist, use the talk-back button freely, and never let them hang long enough to doubt their performance.  Especially when they’re rocking the house!

After tracking has been accomplished, the next step is mixing.  Dustin didn’t reveal all of his trade secrets to me in our short meeting, but he did share that he participates in the classic “Car Test” quite often.  This is where you get out of the mixing room for a few minutes to listen to your work in your car, which is a good way to determine whether or not the mix you hear through those fancy monitors will translate to the real world OK or not.

To piggyback on this concept, Dustin pointed out they use Yamaha NS-10’s in the studio quite often to reference the flatness of their mix.  (These are common in studios all over the world… CA Sound Studios is powering them with a QSC power amp.)  He also never uses headphones for mixing purposes – only referencing.  I found this to be interesting since I know several mix engineers that do use headphones on occasion.

Finally, once the mix has been perfected as good as it can be, the final stage of the production process is Mastering.  Most of the time, Dustin and the engineering team will handle this task in-house with their plethora of fancy, expensive equipment.  On occasion, though, they’ll outsource mastering to dedicated mastering engineers for certain artists.

Once all of this has been accomplished, Production is over and the artist is ready to move onto Distribution and Publishing – topics that will be covered in the near future.  As exciting as it is to finish a recording, after all of that time, money, and effort… the fact is, it’s really just the beginning.  It’s the minimum you need in order to put yourself out there as a musician or a band, and I personally can’t wait to learn more about it in the weeks to come.

Finally, here’s a little shout out from Mr. Lees: “Thank You to the Wright Family for this great opportunity… Fabian Quiros, my business partner… my interns and assistant engineer team at CA Sound Studios… and my father for all the influence and support.”  Dustin Lees has been with CA Sound Studios for the past seven years.  He has also worked at Ocean Way, Capitol Records, Private Island Studios, Westlake Studios, and a few other pro studios.  Dustin may be reached for further information at dustin@casoundstudios.com.