Backstage Pass: In The Studio With Brian Toniq Teel 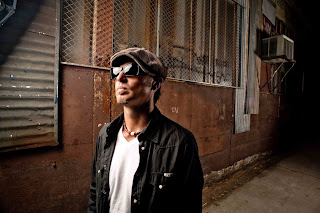 Producer, Multi-Instrumentalist, Recording Artist Toniq does not discriminate when it comes to musical styles, whether it's Reggae, Funk, Soul, Jazz, Afro-Cuban, or Electronic. Throughout his career he has performed around the globe, from Southeast Asia, the Pacific Islands, to South America. He has shared the stage with UB40, Israel Vibration, Third World, The Wailing Souls, The Abyssinians, Diana King, Big Mountain, Inner Circle, Groundation, Iration, The Dirty Heads, Soulive, Les Nubians, Level 42, and The Aggrolites just to name a few.

When he's not in the studio, Toniq can be found on stage playing organ with his 8 piece funk band The Earful, and lead guitar with The Devastators and One Drop.

When and how did you get started in music?

Toniq: I first started making music when...well, I took piano lessons at age six, and I got really into pop music from my dad's influence. When I was about 11 my dad bought me a synthesizer. I got way into that -- I wanted to be be able to play all the songs with the synthesizer voices like Midnight Star and Zapp & Roger. I gotta give my mom props too. She played the organ and the accordion around the house from time to time.

Ya, the kids in my neighborhood played different instruments, so we put together a band. Around the same time, we had a performance at my school with some other kids where we all dressed up as the Beatles and played "Get Back" when I was 12. I started learning to play guitar then too -- when I was 12. So, all the songwriting kind of followed from there. I played in bands ever since then. I learned how to write and arrange music.

What musicians or bands were you a huge fan of growing up?

Toniq: I think my first favorite record was The J Geils Band "Piss On The Wall."

Toniq: David Lee Roth (chuckle), um Billy Idol, and then like I said all the sythesizer funk from the early 80's like Midnight Star, Zapp & Roger, um... Cameo, ya pretty much all the 80's funk. My dad was a dancer and he also had a DJ company, so he'd leave for work and I'd pull out all his records. I'd go through them trying to find the songs that had the synthesizer voice or talk box.

What are you working on now?

Toniq: Um, I've been working on a lot of stuff. I recently finished working with Grammy Award winning artist Mykal Rose of Black Uhuru, on a reggae single I produced called "Truth & Lies" which was pretty exciting.

And I have some really vintage sounding old school 70's funk that I've been recording and- like horn- driven funk. And I've got a lot of the 80's style funk. I'm making a record doing that- and boogie funk. And I've got a bunch of reggae tunes in the cooker. Ya. Those are the 3 areas I've been working with trying to get some of my ideas out there. And I'd really like to start producing other artists- do some collaborations and work with other folks here in San Diego or elsewhere. Nowadays with technology you can pretty much work with anybody anywhere. You can email files back and forth or dropbox or whatever. So that's something I've been trying to manifest- trying to work with other people and get the music out there more.

Can we take a tour of your studio?

Toniq: Ya!
(Walking around studio)
Most of the keyboards I have in here are really old, like I have a Hammond B3 organ and the Leslie speaker that goes along with it- really classic sound you hear in a lot of different kinds of music. Soul, R&B, Jazz, Reggae, ya, and I have a clavinet which was pretty much made famous by Stevie Wonder- it's basically like a guitar with keys on it. It has guitar strings inside of it and pickups. And it's SUPER funky.

And then the electric pianos- I have a Wurlitzer and the Rhodes. All these sounds are more of the organic flavors of music that I really appreciate. You don't really get those same sounds with the new technology coming out. They make things that emulate all these instruments and you can have it all in one little sythesizer that weighs ten pounds or whatever, and I do use those for certain live shows, but I prefer the real thing. So here in the studio, I've got the real things.

(We continue to walk around)
And then I've got a couple synthesizers, some old guitar amps, and here's my recording set up. I've got this really cool machine...

Me (thinking): It IS really cool looking!

Toniq: It's called a  Tascam 388 and it's a tape machine -- it records to 1/4'' tape and it has it's own built in mixing board. It's a super flexible machine.  You can record sounds really clean, pristine sounding stuff. It's still warm, or you can slam the tape really hard and make stuff sound like old James Brown records. Real nasty, gritty, dirty kind of recording. I've been really digging this machine and have been using it quite a bit. But I also have a computer and run Logic and Pro Tools. I use Logic mostly for arranging and producing more contemporary music like for my reggae rhythms, like the newer pop-ier reggae is pretty pristine sounding and clean, so I tend to use Logic to produce those kinds of songs. And with the 80's funk too, because it's kind of high fidelity. And Protools I use if I'm recording a session with live musicians, where I don't need to use a bunch of software or plug-ins, just for actual capturing of a live band.

And then I've got this tape delay, this Roland Space Echo. Super nasty, old school sounding. It's really funny looking too.

Me (thinking): Wow, this looks like something out of Stanley Kubrick's 2001 Space Oddessey!

Toniq: There's actually a tape inside of it that records the sound and then repeats it based on how you have the settings and whatnot for delay, and it has a spring reverb in it.
Um...ya! So that's the gear tour.

Me: Awesome!! Where do you get all this stuff!?!

Toniq: (laughing) All over the place...just being lucky. Like this Moog synthesizer was given to me by a friend- it had a broken key on it, I just had to fix that. I've been really lucky at finding old vintage gear.


Where can we see you performing next?

Me: You're in the studio a lot now?

Toniq: Ya, maybe we should pause this, cause I'll have to look! (laughs)
(Me laughing, pause recorder.)
(Recorder back on)

Toniq: I'm playing with One Drop in Fullerton March 15th. You can look at Onedropreggae.com for details on that. And I'm playing with The Devastators at The Belly Up April 28th for a benefit for O2 for life. And we have some tentative bookings that I don't want to announce yet.

Me: Ok, where's the best place to send people to get your latest music and whereabouts?

Me: Thank you so much, Toniq!