Rock Goddess of the Month (Lzzy Hale of Halestorm)

More than ever, women in rock and metal have been showing the world that girls can head bang, scream and solo just as well as the guys. They dominate the stage with power, grace and charisma, always leaving the crowd with melted faces, warm hearts or bruises from the mosh pits they create. With that being said, here is a monthly tribute to the Rock Goddess of the Month. She is the singer, rhythm guitarist and co-founder of the band Halestorm, Lzzy Hale.

If you haven’t heard of this Hard Rock band, then it’s time you gave Halestorm a listen. Lzzy Hale’s vocals are superior to say the least; her stage presence is like no other and to top it off she plays the guitar! There are so many reasons why Lzzy Hale is crowned the Rock Goddess of the Month that we could go on for days, but here are some highlights of Lzzy and Halestorm’s adventures from 2012 to the present.

Halestorm released their sophomore album, The Strange Case Of… in spring of 2012 and since then have been on a rollercoaster ride of achievements, recognition and non-stop touring. Soon after the release of their album, it was announced that Halestorm was the first female-fronted band to top the Active Rock Radio Charts with their single, “Love Bites (So Do I).” Halestorm also had another single, “Here’s to Us,” featured on the hit TV series “Glee” skyrocketing their popularity to mainstream listeners. If that isn’t enough to consider her a Rock Goddess, she was later given her own custom Gibson Explorer Signature guitar which is something all guitarists inspire to receive. 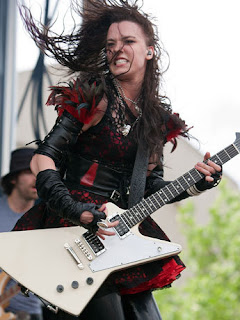 Combined with all the accomplishments Halestorm has conquered in a matter of months they have done, nonstop touring! They've headlined shows as well as sharing the stage with bands like Slash, Evanescence, In This Moment and Chevelle. Lzzy even had an onstage duet with the talented songstress Amy Lee of Evanescence. Her stage presence is like no other and her voice is always at its best. It’s easy to say Lzzy Hale may well be the hardest working female rocker right now. Did I also mention she’s gorgeous? Don’t take my word for it; Revolver Magazine named her the “Hottest Chick in Hard Rock,” another well-deserved honor.

Just when you thought one’s music career couldn’t get any better, Halestorm announces they were nominated for a Grammy for Best Hard Rock/Metal Performance! They made it very clear that the nomination was completely unexpected and with such fierce competition like heavy metal gods Megadeth, Anthrax and Lamb of God, they surely didn’t expect to win. However, the rock gods smiled down on Halestorm that day as they went on to win the much deserved and well-earned Grammy, a feat that most musicians never get a chance to accomplish.  “Hale” yeah!

So what’s Lzzy and the boys of Halestorm up to now? Touring once again! Seriously, does this girl ever take a breather? On top of that they will be attending the “Golden God Awards” in May where they have been nominated in four categories: Best Vocalist, Best Drummer, Album of the Year, and Song of the Year which I’m sure they’ll go on to win at least one of these. They are also in the progress of recording there second cover album, so be on the lookout for that as well. Here’s to you Lzzy! The Rock Goddess of the month.

Tour dates available: http://www.halestormrocks.com/tour
By Unknown at 11:00 AM