“This is the kind of balls-out rock that dominated in the 90's... but it took a woman to bring it back” – A Dead Sara Youtube fan. 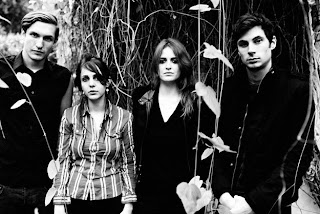 The Youtube comment hits the description of Dead Sara right on the nose. This is a band the pours out raw energy all the time. With the calm and melodic or folk-inspired rock dominating the new music scene lately, it is time for a breakthrough of something to mosh too. Dead Sara is going to be that band.

Dead Sara is comprised of Emily Armstrong (lead vocals, rhythm guitar), Sean Friday (drums), Siouxsie Medley (lead guitar), and Chris Null (bass). The band has two singles currently out: “Weatherman” and "We Are What You Say.” What’s really hooking people with these and other Dead Sara songs is Armstrong’s incredible vocals. She can belt a note into a scream and back into a note again flawlessly. There really hasn't been a female singer that can sing rock like this girl in over 20 years. Many people are comparing Armstrong to Janis Joplin because of her vocals, but I think it is even more than that. Joplin was known for her connection to her fans and stage electricity which is exactly what you get with Armstrong.

I don’t want to focus just on the vocals though, as the whole band is just as addicting. The chemistry between all four members is sensational. Their mad skills have been noticed in the industry too, as they are currently opening up for one of the most theatrical and successful bands of our time—Muse.

The band also keeps up with their fans on the regular with Face-to-Face Fridays which is a Youtube video stream they put together to answer fan’s questions. I think this is just wicked; every band should start off by reaching out to their fans consistently, and that is what they are doing.

Now the time comes when you start investigating the band for yourself. Take a deep breath, turn up the volume, and begin with Dead Sara’s hit single “Weatherman”. Enjoy.