Into the Scene – Metal Warzone 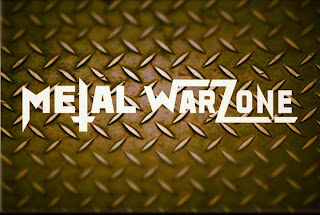 Metal Warzone is a Los Angeles film, photography, and promotional group in the Los Angeles area. Owned and operated by Adrian Mejia, his presence at local metal shows is nearly guaranteed, making him one of the most loved and respected members of the scene. Adrian is often found filming and photographing sets for local acts, providing bands with high quality media that they are then able to use for promotional purposes, free of charge. Between this, and the sheer number of shows Adrian attends, many bands and musicians proudly use Metal Warzone photographs and video on their band websites, as well as personal and public social media accounts.

A few months ago, some of Adrian’s gear was damaged at a gig, thanks to a rather enthusiastic mosh pit. In response, the LA metal scene rallied, throwing a massive fundraising show and Kickstarter campaign to raise money for Metal Warzone, and help Adrian replace his equipment. Both campaigns were a huge success, and allowed Metal Warzone to keep return to the front row of the community’s shows. After all the help Adrian has given the scene, the scene was more than happy to give back, and help Metal Warzone remain a prominent figure in LA’s metal and music community for years to come.

Below is a short interview I had with Adrian, where I sought to learn more about him as a person, and why he does what he does for the community at large. 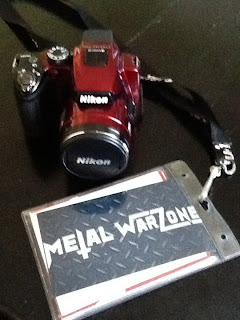 How long have you been involved in the music scene?

I have been into LA Music scene since 2010 but in global scene since 16-17 years ago, supporting American bands first. Then, some years later, Europeans, Asians and all over [the world] and almost all genres of metal music! I’m open mind about genres, mostly I love black metal music.

Do you play any instruments yourself?

I tried to learn guitar some years ago; I wanted to play guitar as Dimebag Darrel. Never learned, never got the talent for guitar so I quit. I still got my guitar but never touched again. Recently, I start thinking I'd play bass. I have all these amazing friends in the local scene who play bass and wish to be like them, like my friends Roger Morales and Chris Hicke, just to mention some. There’s more and there’s many talented!

Which shows have you photographed that you would consider the most fun?

For me, all the shows are fun! Every show is a memory! Is so special for me, about the most amazing ones in my life. One was covering and interviewing the Bands Kampfar and Vreid at the Whisky a Go Go in 2011; they are amazing friends, it was so special spending almost all day there. The other one it was covering the gig with Watain, The Devil’s Blood, Behemoth, In Solitude in 2012 at HOB Hollywood seeing Selin Lemouchi playing with Watain and The Devil’s Blood was the best gig ever to me. You will never see that kind of tour again! Special thanks to Kristin Gypsy Schloesser/We Are Team Hans for the photo pass/help!

Which venues do you consider the best to work with?

The best venue for me is the House of blues in Hollywood. Tuesday I got the chance to cover a gig of local bands at the House of blues in Anaheim. It was an amazing experience; special thanks to my friend Edwin Haroutonian. One of the best venues was the Key Club before they started charging for photography etc., that was a shame. I love shooting at the VEX/ARTS LA, amazing venue. For the underground scene my favorites are The Airliner bar; I got the honor of capturing footage and photos for Metal Invictus, one of the best promoters of the LA metal scene. Special thanks to my friends Angie, Jimmy, Cesar, and Josh for making me part of their family! Another favorite one is the Silver Factory Studios. I got the pleasure to work there with World Blackened and Arrogant Behavior. Special thanks to Chris Jimenez, who believed in me since the beginning, and Jesse Goyta. Thanks to both for support me and helping me.

What equipment do you use?

I use a Sony hand cam for recording live songs, a Nikon semi-pro cam, which I use to capture footage in all the Venues. Recently, I got a new Canon Cam that was possible to get it basically because of all the LA Metal Scene, my friend Leslie Medina, and many others who helped me by raising money and organizing benefit gigs. Thank you all amazing bands, musicians, friends, promoters.

Is there anything you want people who aren’t involved in the scene to know?

Yes, metalheads are an amazing people, respectful and hardworking. We help each other, we don’t judge anybody, we care about everybody, we are a big family!

At the end of the interview, Adrian had this to add:

I want take this space to give a huge thanks to Chris Hicke and Creative Edge Music for this interview, more success guys! And all the bands, promoters, musicians, and friends who help and support me; there’s many bands to mention, but all you know who you are. Thanks to those check my page, used my photos, and used my footage for me is a REAL HONOR! Metal Warzone is here better than ever to support and hail bands from all over LA, California and all over the world! With much passion and Respect! \m/

Anyone interested in contacting Adrian, or looking through his collection of images, can do so through the following web sites: