Syrebris, a four-piece metal act out of Los Angeles, has recently released their debut EP, “Ætheric Dynamics.” Drawing on influences like Cynic, Death, and Animals as Leaders, Ætheric Dynamics brings together the heavy riffs of death metal, with harmonies and more jazz-oriented clean sections more common in progressive styles. Their musicianship is consistently on point live, something that is not lost on the EP. Syrebris features Victoria Villarreal on guitars and vocals, Manuel Villarreal on guitars, Jess Villalta on bass, and James Coppolino on drums. Former frontwoman Jeanette Hunsberger recorded vocals for Ætheric Dynamics.


1. Who would you say has been some of your biggest musical influences?
James - I have many influences in music. I listen to all types from classical, jazz, rock, world, anything really. It is really hard to pinpoint my influences when it comes to writing because I usually just feel something and play it. But it all stems from somewhere. I really enjoy music like Pink Floyd, Tool, Mozart, Emerson Lake and Palmer, Akercocke, Old Man's Child, Cynic, to name a few... I'll go on for days.

3. Aside from music, what other interests do you pursue?
Jesse - Right now I’m going to school for electronic engineering. But I like going to the beach, going hiking, camping.

4. What has been your favorite gig so far?
Victoria - It’s a tie between two. I would say Maidens of Metal I (hosted by Metal Invictus) that was at the Airliner in Los Angeles last year. It was a great turn out. The crowd was really into it and were very supportive of all the bands. We had a great response as well. Lots of good vibes. It always good to see how our music can affect people in a positive way. Also the show we played in Las Vegas for the first time this year was a great experience. Huge stage and friendly crowd. We played there with our buddies Insentient and Nihilitus [Disclaimer: I am the bass player for Nihilitus] and it was fun being on a road trip with them and hanging out. Good times.

5. Now that you have an EP, are there any touring plans?
Manuel - We do have plans for touring, but due to our lack of funds we have halted those plans. We will work on that and continue to play out of state shows as they come. 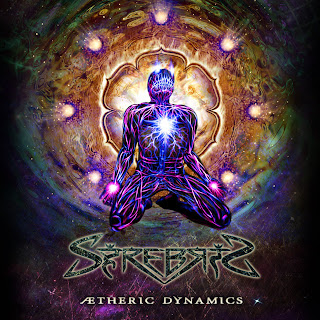 In addition to an interview, I have been given the privilege of reviewing Ætheric Dynamics. Well written and composed, the EP is a solid first release by any measurement, definitely worth having in any metalhead's collection.

Ætheric Dynamics opens with “The Still Point”, a synth-laden, spoken word intro that sets the stage for Syrebris’s foray in to human spirituality and inner growth. Track #2, “Eye of the Beholder,” opens up with riffs reminiscent of Cynic, and follows up with a chorus that brings to mind modern acts like Arch Enemy. The guitars bring a near relentless barrage of harmonies that serve only to accent the band’s melding of new and old influences. “Subjective Reality” steps up the pace with thrashier riffs and relentless up-tempo drumming that accentuates a lyrical assault on the human condition. “Emerald Memory,” The EP’s fourth album, is the first track to include clean guitars. Coupled with lyrics spoken in whispers and dark solos, the track sets an eerie, haunting mood. “The Current” opens with the sound of ocean waves, setting the mood for the song before the instruments come in. The EP’s second use of clean guitars, The Current’s intro takes a slower approach to the song, making full use of each instrument’s ability to create a relaxing ambiance that isn’t lost as the track turns from jazz to metal. The drums are particularly prominent here, providing an extra kick that helps carry the tune from its ambient intro to much heavier, sudden ending.  “Spiraling Downward” continues the heavy vibe established by the end of The Current, and uses that energy to delve into humanity’s tendency to inflict suffering upon itself. The bridge of this song is perhaps the heaviest part of the EP, combining relentless chugging with sustained notes that create an atmosphere of frustration that compliments the song’s lyrical content. “Eno Lla” begins with a synth- laden intro that breaks into one of the fastest riffs on the album, continuing the feeling of anger from the previous track. As the EP’s closing track, Eno Lla ends on a high note, combining all the technicality present in the rest of the album, and closing on a two-minute long solo that brings with it a final, definite end to the journey.

All things said and done, Ætheric Dynamics is a solid first release by any standard. Fans of technical, progressive death metal should definitely keep an eye on Syrebris in the years to come, as they provide a new, unique sound to the music scene that few others have encroached upon. Be sure to check them out on Facebook, and download Ætheric Dynamics from their Bandcamp page; help these guys get the funding they need to hit the road this year.