Insentient is one of LA’s premier black metal bands. Hailing from Orange County, Insentient is a must-see for anyone who enjoys black, death, or thrash metal, as well as stellar musicianship overall. Comprised of James Coppolino on drums (see also: Syrebris), William Palacios on bass, Kimberly Orellana on guitars, and Leslie Medina on guitars and vocals, Insentient is a musical powerhouse, delivering powerful and awesome stage presence. Leslie’s vocals are brutal, while her and Kim’s guitars play incredibly well together, and James lays down drum lines and fills that fit exactly where they need to, flowing from groove to blasts and back in such a way that it almost seems easy. Will, meanwhile, lays down some excellent bass lines; he does a great job of doing his own thing while still holding the song together.

Insentient has recently released their debut EP, Remnants, which is sure to cement their name on the skulls of many metal heads. The recording quality is great for an unsigned band; the guitars are clean, the drums and vocals are powerful without being overbearing, and even the bass is audible over cheap laptop speakers (as a bassist, I may be a bit biased). All in all, the mix is as close to perfect as you can hope for; everyone can be heard at a reasonable level, without any one instrument or member drowning out anyone else. 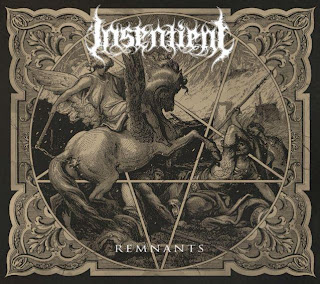 Remnants begins with Winter’s End, a powerful introduction that hits and doesn’t let up. The thrashy guitars and blast beats let you know that you’re in for a hell of a ride. Track two, Decrepit Minds, opens with a killer guitar riff before breaking into heavy chugging and more powerful drumming. The lyrics to this song are perhaps among my favorite on the EP: short, sweet, brutally critical, and right to the point. Seethe, the third song, opens with deceptively pretty clean guitars before diving into a rolling 6/8 rhythm that’s difficult not to move your head to. I’m particularly drawn to the bass here, as the verse contains some catchy chord use not often seen in metal (again, biased). As I Wither comes next, and is quite possibly my favorite song live, if only because the chorus is catchy and easy to sing along to. The guitar riff during the verse is also particularly heavy, which only adds to the fun this song is to experience live. The fifth song on the EP, Death Toll Rising, begins with some impressive sweeping by Leslie, and has some of my favorite drum work from James, especially the work he does with the cymbals throughout the song. Additionally, Will has written some great bass builds and fills that give the transitions from section to section that little extra kick you don’t get as often as you’d like from other bands. Track six, final song on this EP, is the title track, Remnants. Again, a powerful guitar intro pulls us in to a song that holds on and never really lets go. The bridge contains some incredible bass lines, and breaks into a three part harmony/solo (guitar/guitar/bass) that feels almost like a bass solo with the fills added at each repeat.

All in all, Remnants is a powerful debut release, and a must have for your musical library, especially if you consider yourself a metalhead. The instrumentation is solid all around, both live and in the studio; exactly what you would expect from one of Los Angeles’ best musical acts. While Insentient has done quite well for themselves in the LA area, they have also developed a following in Los Vegas and Texas, and are looking to sink their fangs in to Colorado this year. If you get the chance to see them live, I highly recommend you do so.

If you’re looking to pick up Insentient’s music, merch, or get in touch with the band, you can do so at the following sites: