The trip out to Nashville was fantastic, although it was a very busy trip with air travel, the show, and socializing with industry members during the cracks!  Now that I'm finally catching up to things, I'm stoked to discuss the Summer NAMM show this past weekend and my experiences in the great town of Nashville.  Let's start out with a quick video that quickly surmises how cool it was to peruse all the booths at the show:


The flight out from San Diego was simple enough, and I was fortunate enough to share an aisle with two other industry members, Anthony and Kimberly from San Diego Music Studio in San Marcos.  They were on their way out to accept an award as a NAMM Top 100 Dealer, which is a major accomplishment in the music industry.  It was a pleasure discussing their business and must-see booths at the forthcoming show!  They are involved in some really great philanthropy in the local community, so I would highly encourage you to check them out when you get a chance.  One of their programs is a scholarship for kids in need, which is funded by family who recently lost its father and was inspired to give back to the community as a result.

Upon arriving in Nashville, I shared a cab into town with these fellas where we were greeted by a very impressive downtown section of the city.  The Courtyard Marriott that I was scheduled to be in for the next three nights was located on 4th Ave N and Church St, just a few blocks from everything: the famous Cumberland River, the new Music City Center (where the NAMM convention was held, adjacent to the Country Music Hall of Fame), and the strip (Broadway).

After getting checked into my room and setting up my workstation for the weekend, I explored downtown for a while to acclimate myself to the city.  I couldn't help but notice how clean the city was (and how many bachelorette parties were out walking around -- Fun Fact: Nashville is the #2 destination in the US for bachelorette parties).  What stood out to me more than anything else, though, was how musical Nashville truly is -- everyone has a guitar and every bar, club, and restaurant has live music emitting from within its walls at all hours of the day.  The rumors are true, and it's pretty much exactly what you'd expect: a lot of country/southern rock, of course.  The best analogy I could use to describe this phenomenon is that Nashville is to music as SoCal is to surfing.  Down here, near the beach you see everyone with surfboards and surf racks on their car.  Out there, it's guitar cases and mic stands.

The next morning I strolled down to the convention center and picked up my badge for the show.  Then I entered Hall A, where everything and everyone was very much alive and buzzing.  After running right into the Casio booth, which was front and center, I made my way around the entire floor in a relatively short period of time.  The Summer NAMM show has always been the smaller of the two (compared to Winter in Anaheim), but that's perfectly alright.  It was nice to actually see everything and talk to everyone by the end of the show, whereas in Anaheim I wished I had more time to go back and do more.  The Anaheim show is nearly impossible to get through even if you went every hour of every day, assuming you wanted to cover everything in a meaningful way.


Nearly every booth was memorable, but the most stand-out booths and products came from these vendors in my eyes:

After a quick stop by the press room to sync some photo and video, I walked down a level and moved over to the Top 100 Dealer Awards dinner, where I was served complimentary fine dining with open bar.  Nice!  The awards ceremony was somewhat predictable, with all the standard handing out of awards to Top 100 dealers with musical performances sprinkled within.


Two glasses of wine later, I went back to my hotel to take notes from the day and sync up some media content on my laptop.  After taking care of this and grabbing a bite to eat, I made my way back down to Broadway to meet up with new friends from the show earlier in the day.  We enjoyed another drink at a place called the Brewhouse, and afterwards we walked over to a lively venue called The Stage, which truly deserves its own post.  We struck up a conversation with some locals while waiting in line, then went inside (FYI, no cover charge!) and watched Todd Sansom's band knock it out of the park with rock and country hits from the last two or three decades.  The dance floor came alive with a mixed but somewhat young crowd, and the show went on until about 2:30 a.m.

The next day presented more opportunities for music industry networking and product discovery at the NAMM show.  It was this day that I spoke at length with Paul Edwards from Edwards Audio Research, who explained in great detail to me how he designed his signature rackmount preamplifiers.  Having tested these preamps out for myself, I can say they are extremely warm, inviting, and relatively transparent.  Paul also introduced me to his son, Aaron, who is a producer and engineer in the LA area and had plentiful advice about constructing signal chains in the studio for hard rock/metal guitar sounds.


(Another bass video from the showroom floor that day)


Towards the end of the show, I had a great conversation with the guys from Fargen Amps about their signature John Lennon series, all-tube amplifiers.  Marc and the crew broke down in painstaking detail how they designed the circuit and build the cabinets for these beautiful little things.  They aren't high-wattage amps by any means, but they still get loud and carry tons of vintage tone with them.  These are truly remarkable amps and I would recommend them to anyone looking for a boutique piece that's really built solid and meant to last.

That night I grabbed dinner at Midtown Tavern in the Vanderbilt neighborhood with my friends from San Diego Music Studio.  Nearly as soon as we sat down, we were reminded of the sheer quantity of bachelorette parties roaming the city when a group of brides maids accidentally stumbled into us with a large, purple inflatable object. This granted a few laughs from everyone involved, but even this distraction couldn't keep our attention off of the appetizers for long.  We had ordered BBQ cauliflower, which was prepared like wings with an additional blue cheese sauce on the side.  Paired up with a local pale ale, it was the perfect finish to a long trade show day.

We spent the rest of the evening wandering from place to place, finding one of the best little trios we'd seen the entire weekend at a small, hole-in-the-wall pizza bar.  We listened in awe as an unknown group played the best rendition of "Stayin Alive" I've ever heard followed by some classic Michael Jackson hits and the like.  After this experience, we were on a musical high that almost led us into the "let's get a tattoo in Nashville!" trap, but fortunately clearer heads prevailed in the end.  Instead, we wandered back to our hotel to share our experiences from the show the past two days and reminisce on the event as a whole.

Before departing Nashville the following afternoon, I took a quick peek at the Country Music Hall of Fame and spent some time over at Third Man Records, Jack White's record label.  The ambiance inside is both inviting and daunting.  Perhaps the best way to describe the atmosphere is very vibey with a mix of black, yellow, red, and a few other vibrant colors.  Platinum and Gold awards given to the White Stripes were on the walls along with a bunch of other interesting trinkets.  The coolest feature of the store-front, though, is the booth where you can insert a couple tokens and make a quick recording.

And it's not just any recording -- you step into the booth for a minute or so with a guitar and get cut straight to vinyl!  Unfortunately they didn't have the guitar out when I was there, so I had to take a rain check, but it's certainly on my to-do list for when I return to Nashville next.

When I finally caught my cab back to the airport, I was quite sad to leave.  Sure, I was happy to be coming back home to San Diego, but there was something so friendly about Nashville... so inviting.  Even though I'm primarily a hard rock/metal guy, I absolutely loved my time out there and would be back in a heart beat if I had a reasonable excuse to buy a plane ticket.  The people there were noticeably friendly, open, and talkative.  The music was plentiful and well-done throughout the various venues and events in the city.  Food and drink were both good, and of course the main event (the NAMM show) was excellent.

Stay tuned for more information on the NAMM show and specific products in the near future. 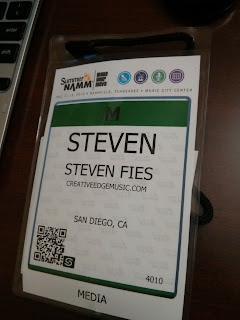