The Importance of Acoustic Sound Diffusion in Recording Studios - 5 Reasons


Why Sound Diffusers Are Often Better Than Absorption


The importance of sound diffusion in recording studios cannot be overstated enough, in my humble opinion.  However, too many of us opt for absorptive treatment when confronted with a choice between the two.  Home studio enthusiasts in particular are susceptible to overdoing it with too much acoustic absorption.  Since we are taught that rectangular (or worse, square/cube) shaped rooms create all sorts of acoustic problems, we have this knee-jerk reaction to attack it with oodles of absorption.

What does that accomplish, though?  Even if you achieve control over your room's acoustics, you may wind up with a dead, unnatural sounding space.  This is sub-par for recording of any type, and while you might be able to get away with a fairly dead room for mixing purposes, it's not ideal.  Mixing in a dead room can lead any engineer to make a mix too wet with effects and reverb.  Better is to achieve a room with natural, albeit controlled reverb decay, so the mixing environment mimics real world listening to at least some degree.

This is where sound diffusion reigns king.


By reflecting sound energy in a mathematically controlled way around the room, rather than absorbing it, diffusion allows reverb to decay more naturally while still addressing fundamental issues such as comb-filtering and the build-up of standing waves.

2. Diffusion Can Cover a Huge Portion of the Frequency Spectrum


Depending on the design and specification of your sound diffusers, they can reach well up into the high range of the frequency spectrum, and impressively all the way down to under 300 Hz.  Because of this, sound diffusers can be placed strategically both in control rooms and live rooms, since they preserve sound energy while still addressing issues with resonance.


In fact, diffusion can even make an instrument or other source sound more natural because of its reflective properties.  In nature, the human ear is used to reflections and reverb trails from a single sound source arriving at the inner ear at multiple intervals, since the source's sound is likely to bounce off of many surfaces at varying distances (from the source, and from the listener), all eventually traveling to the listener's ear at different points in time.

Imagine standing in the woods and hearing a bird chirp, with literally thousands of reflections bouncing off of nearby trees, rocks, and other surfaces, eventually making their way to your ear.  What's incredible is that our brains can interpret the differences in arrival time of these reflections, factor in the differences between our two ears, and then quite accurately return to our conscious mind the location of the sound source in three dimensions.  Yes, it seems our subconscious minds are quite capable of doing very advanced math, even if we didn't realize it.


Due to the same mathematical properties discussed above, sound diffusers can make a small room sound like a bigger one in a jiffy.  This is because in a naturally bigger space, our ears are accustomed to receiving more reflections at greater intervals from a source than in a smaller space.  An extreme example of this would be the slap back echo that occurs in a canyon, with very audible delays.  Our ears are so sophisticated, though, that even marginal differences in smaller spaces add up to something meaningful.

By using strategically positioned diffusers, the resulting reflections, which may bounce off of side walls, ceilings, or other surfaces before traveling back to the ear, will take longer to arrive and create the illusion of a larger space.  This can be especially useful when tracking instruments in a smaller space than you would like, as the final recording will have a naturally "bigger" sound when diffusion is used properly.

GIK Acoustics has a great, short video on this that I would recommend you watch, too: 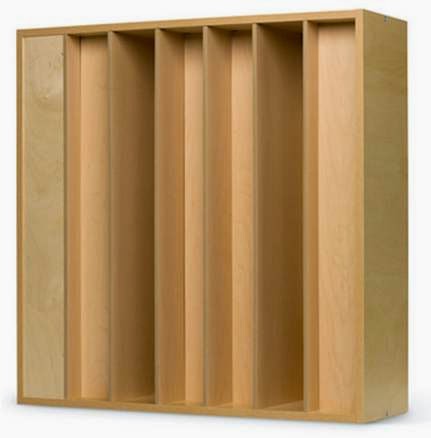 Did the picture at the top of this post catch your eye?  What about this one?  Let's face it, wood looks absolutely amazing.

Especially in a professional environment, such as a recording studio (and even home studios/project studios), the addition of some well-finished wood provides a look of sophistication and elegance that no absorption panel ever will.  Don't get me wrong, absorption is still necessary to achieve a comprehensive acoustic solution; but there is no denying the fact that wood is aesthetically quite pleasing.

Where to Put Sound Diffusers in Your Room


You may be thinking, "Great!  Now tell me where to place them already..."  Alright then, let's review my four favorite locations to put them, keeping in mind that you can put them just about anywhere reflections are expected to be.  Everyone's room and situation will be different, so feel free to adjust to taste or experiment with different positions until the desired effect is achieved.

1. Rear Wall of Your Control Room


This is by far the most popular location for most mix control rooms.  This is where I chose to put them in my own control room, and it's where I have seen them placed in many, many other professional recording studios that I have been to.  This does not mean that other design concepts will not work, but you can rest assured that countless sound engineers have chosen the rear wall as prime real estate for diffusion.

By placing diffusers on the rear wall, the sound coming out of your monitors will be redirected in a number of directions around the room, leading to the effects we discussed earlier in this article, and preventing resonance issues that would otherwise affect your perception of the mix if the sound waves were bouncing straight back off the wall.  Note that many control rooms are already fairly heavy in absorption at the front, so putting diffusion in the back helps open up the sound space a bit, too.

2. The Ceiling, Including Drop Ceilings 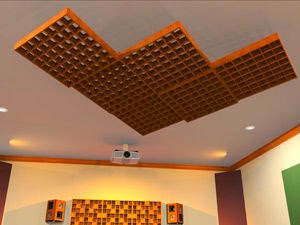 Sometimes we forgot about the space right above our heads.  This includes when we're mixing, or even during tracking, and yet our ceiling has the capacity to produce some of the nastiest flutter echos known to man!  Keep in mind that the ceiling is often the closest surface, and fastest reflection, that you will experience as compared with the rest of your walls.  This one surface alone, if left untreated, can blur the stereo field and create all kinds of other issues, especially in the higher frequencies.

When I had fully treated my own control room, the last piece to go on was my ceiling absorber (chose absorption in my case due to a very low ceiling).  Despite all of the other treatment in the room, there was still massive flutter echo in the listening position until this last piece went up.  Once this was done, though, everything suddenly locked into place and the listening position became fantastic.

On ceilings that are 9-10' or higher, diffusion offers a good solution for above the mix position.  Similarly, in live rooms or other spaces with drop ceilings, 2' x 2' diffusers can fit right into place and can be nice to mix in with absorption.

3. Spaced Around Side Walls


Especially in live rooms or performance spaces, there will often be large expanses of flat walls that need to be addressed.  It is not practical to throw tons of absorption on these walls, either, as the natural liveliness should be preserved.

Even in smaller spaces, placing diffusion around side walls periodically can help add to the complexity of reverb and reflections bouncing around the room, yielding a natural sound with more balanced decay.

4. Behind or In Front of Drum Kits


Drum kits are one of the biggest bears to deal with in any recording situation.  You might be prepared to do everything else in your bedroom, using Axe-FX II for guitars, DI'ing bass, and recording vocals in a halfway decently rigged booth in your closet, but you are guaranteed to be SOL on tracking drums that way.  If you're into programmed samples, you can probably avoid this step altogether, but personally I have always loved the sound of recording a live drummer more than anything else.  Besides, if I played drums, I would be really opposed to my engineer programming in all my parts!

To properly record a drum kit, sufficient space is needed to set the kit up, mic the kit, and allow for some propagation of the kit's sound around the room.  But regardless of the room size, diffusion can come to the rescue once again by intelligently scattering a drum kit's many frequencies.  This will address flutter echo, prevent comb-filtering, and create a larger sense of space -- all desirable things in most drum recordings.  Whether you place the diffusion behind the drummer, in front of the drummer, or somewhere off to the side, you have everything to gain by adding it to the equation.

In the picture to the right, it's a little hard to see clearly, but you can tell where I placed some diffusers in front of the drum kit in my studio.

Note, there is a minimum distance the sound source / listener must be away from a given diffuser for the diffusion to actually work (notice how I placed my diffusers a good distance out in front of the kit).

If this minimum distance is not listed by the manufacturer of your diffuser, you can either call and ask them about it, or you can download the QRDude freeware to calculate it yourself for common 1D and 2D QRD diffuser designs.


Speaking of QRDude, stay tuned for my forthcoming article on DIY Acoustic Diffusers, in which I'll break down how I made the diffusers for my studio over a weekend.  In the meantime, if you haven't already built yourself some bass traps, you'll want to make sure to read the DIY Bass Traps guide to get the full scoop on that.  Like with sound diffusers, building your own bass traps can save you hundreds if not thousands of dollars in the end.

Remember, sound diffusers are useful tools that should be taken advantage of whenever possible in recording studios and performance halls.  While buying them new can be expensive, they do look quite nice, and soon enough I'll show you how to make them on your own anyways. ;-)