Rise Against at RIMAC Arena 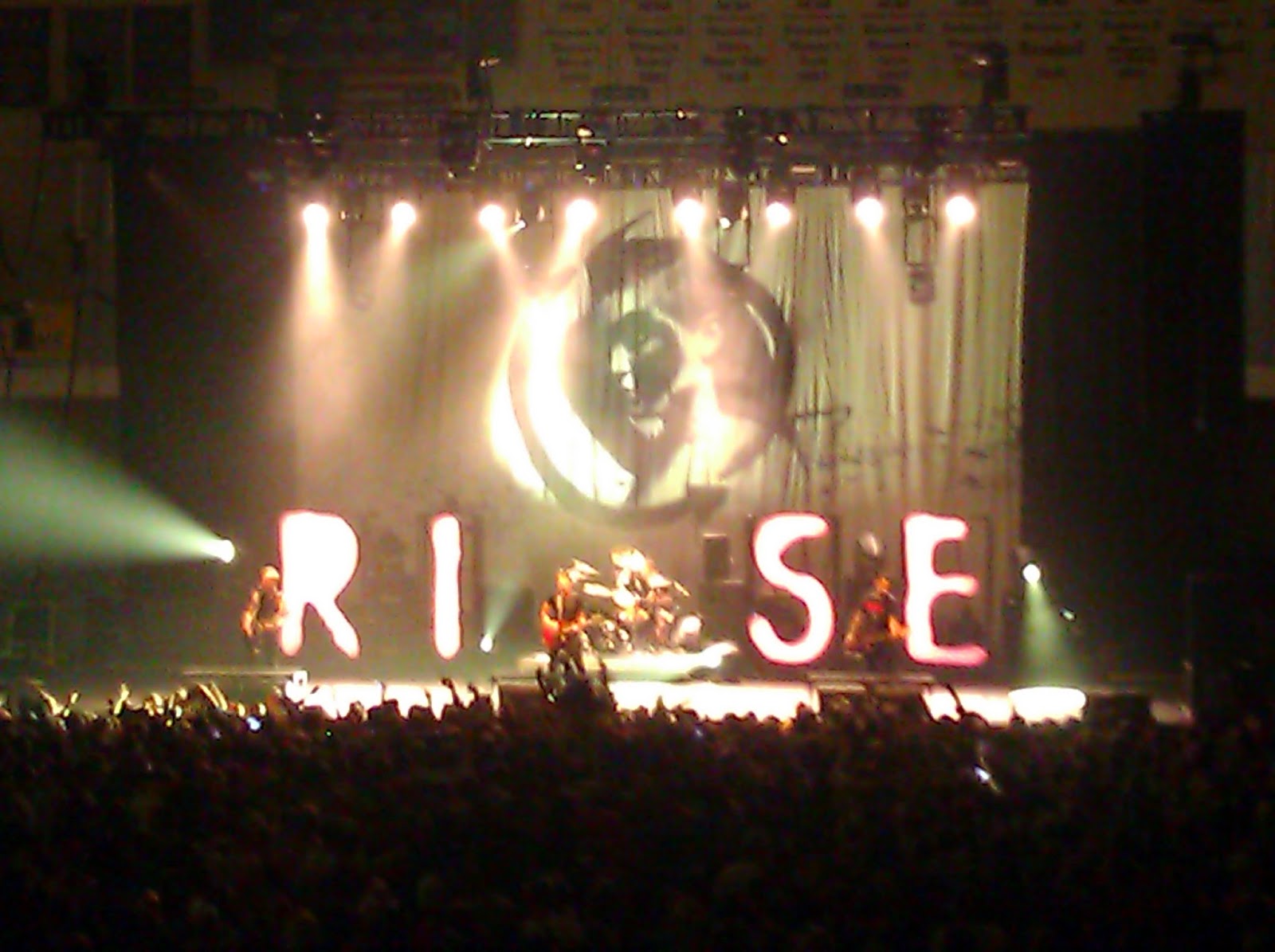 This past Thursday, I had the pleasure of seeing Rise Against as they toured the US in support of their new album “The Black Market.” I saw them with a friend at the RIMAC Arena on the UC San Diego campus with a friend. On tour with Rise Against was Touché Amoré and Radkey, two bands I’d never heard of before this tour was announced.

First up on stage was Radkey, a three piece band of brothers, Dee Radke (Guitar/Vocals), Isaiah J. Radke III (Bass/Vocals), and Solomon Radke (Drums). The music itself was pure punk, high tempo songs made up largely of power chords, though several songs included some impressive solos from Dee. As lead vocalist, Dee’s lines were quite melodic for a punk band, though it was difficult to hear brother Isaiah’s backing vocals. These guys clearly practice together often, as they were incredibly tight musically, and the stringsmen did a great job playing off of each others’ presence on stage. All in all, they put on quite a performing show, and I would happily go see them again.

Playing direct support to Rise Against was Touché Amoré, who seemed to be taking a more hardcore approach to the punk genre. Their music was definitely heavier than either Radkey or Rise Against, and I believe they were playing along to a backing track, which appeared to be serving as a break between songs so the band could retune. While this group has had a longer history, having toured Europe with Rise Against previously, I can’t say I was particularly impressed. Jeremy Bolm’s vocals were a deal killer for me, as he was perpetually stuck in shouting mode, even during ballads. I found the lack of vocal nuance or deviation to completely kill the mood of the performance; had there been more variation in Bolm’s vocal technique, I think I would find this band much more endearing, as the rest of the band was rather appealing. The guitar work of Clayton Stevens and Nick Steinhardt worked well together to create a rather broad soundscape, while the energy of Tyler Kerby’s bass and Elliot Babin’s drum work created a tight, powerful rhythm section that, for me, completely makes the musicianship.

Headlining, of course, was Rise Against. I’d first heard of them in high school after coming across the video for their song “Ready to Fall;” As my musical tastes at the time were leaning heavily towards politically charged lyrics (a trend that hasn’t really changed), that video made an instant fan out of me. I’d seen them in 2008 after their release of that year’s album “Appeal to Reason,” which is hands-down my favorite album of theirs. I was blown away by that performance, and had similar expectations before attending this concert. To put it mildly, I was not disappointed.


Rise Against pulled out many of their hit songs from throughout their career, including at least half of “Appeal to Reason,” and a song from their very first album, as a throwback to the first time they played San Diego in 1998. The performance was phenomenal. Bassist Joe Principe and guitarist Zach Blair were constantly in motion on stage, while drummer Brandon Barnes held the band together on drums. Time McIlrath’s singing was incredible, and he alternated between playing rhythm guitar and holding the mic, while providing solid stage presence with both. It is clear to anyone who has ever heard him sing, especially live, that he truly believes in what he does and the causes he supports, and I have little doubt that every member of Rise Against would be absolutely miserable if they were forced to do anything else.


I have attended and performed at dozens, if not hundreds, of gigs and concerts. I have marveled at the technical proficiency of Animals as Leaders and Between the Buried and Me, been swept up in the dark ferocity of death metal, lost myself on stage to the point that I have forgotten performing entire songs, but nothing at all comes close to what I experienced at this show. About halfway through Rise Against’s set, during their song “Satellite,” something clicked and it felt as though my entire body began to resonate. This vibration kept up throughout the rest of the performance, by which time it was so strong that I needed a minute to compose myself and stand without falling over. I am by no means a religious person, but I have to assume that this is what people mean by a “religious” or “spiritual” experience. Even now, it’s difficult to put in to words just what I felt, but I would be surprised if anything can recreate it.
By Chris Hicke at 10:30 AM