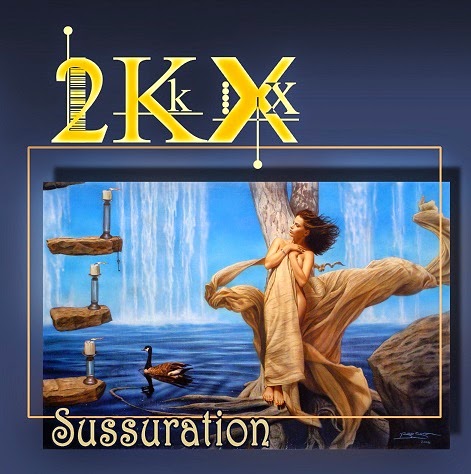 2KX is a highly intriguing band whose music reaches out and grabs you the very first time you hear it.  And not in a heavy metal loud sort of way, but in a more sophisticated manner.  The composition combines several complex elements of musical production to achieve an almost nostalgic effect, throwing me back in time as I travel through that which is Sussuration.

The guitar solo from 1:39 - 2:19 really caught my attention, since it has classical elements that remind me of Michael Angelo Batio (one of my favorite guitar teachers of all time) and fits the space so perfectly.  It is almost unexpected so early in the song, but welcome in its warm nature.

Lemniscate offers similar vibes, with lengthy ballad-like qualities that remind me in many ways of Opeth's arrangements despite the difference in genre; they both share the same sort of sophistication and build up.  The effect is made even more powerful with the subtle yet audible delays on higher frequency components, such as around 3:45.

What will really blow you away with this second song is how it shifts to such a powerful ending by transitioning into a slow-tempo jazz feel at the end.  After working through a more progressive feeling midsection (of the song), it is a somewhat unexpected, but well-anticipated ending.  The simple pluck of what sounds like an upright bass becomes significant in the presence of simple saxophone riffs and easy, intentional percussion.

After speaking with the band, they are thrilled about their new release after spending the last two years out of commission while Lisa LaRue, their keyboardist and composer, battled to regain her health.

According to their recent press release, this new album involves an unusual feature in that one movement of the song will be available as a special 7”, hand-shaped lathe cut record!  It will be cut real time on a vintage 1940 record lathe, too. This movement is the ballad section of the song and the only part with vocals.

Note that the CD/EP will contain a full-length version of ‘Sussuration” as well as the previously released singles from 2KX: “Lemniscate,” a radio edit of “Sussuration,” and a bonus of “Song For a Name – 2KX” by Johnny Unicorn It will be available as a CD and an mp3 album in addition to the radio edit “Sussuration” ballad which will be produced in a very limited quantity as the hand-shaped lathe cut 7” record.  Digital downloads are available now.


Credits as noted by the band: 2KX is comprised of Lisa LaRue on keyboards, Steve Adams on guitar, Mike Alvarez on cello, John Baker for vocals, Merrill Hale for drums and percussion, and Don Schiff on bass and NS Stick. Baker, previously lead vocalist/guitarist for Mars Hollow as well as playing for Christian Love (The Beach Boys) and The Little Girls, joins as a band member on this release, as lead vocalist. Special guests are Michael Wheeler playing Dilruba and violinist Brenda K of the Panache Orchestra. The album was produced and mixed by LaRue and mastered by multi-Grammy mastering engineer Adam Ayan of Bob Ludwig’s Gateway Mastering. Ayan is known for his mastering of bands such as The Rolling Stones, Nine Inch Nails, Rush, Linkin Park and numerous others.

2KX has been previously nominated as Best Instrumental Band at the 21st Annual Los Angeles Music Awards and has a bright future ahead of them. Earlier career highlights for Lisa LaRue include being the first female artist signed to the Sound of America Records (SOAR) Natural Visions sub label, the 2008 Oklahoma Music Awards “Native American Artist of the Year” and a 2008 nominee for the Hollywood Music Awards Instrumental category.

For more info on Lisa LaRue and 2KX's “Sussuration” go to www.lisalaruemusic.com or contact First People Media via email at info@lisalaruemusic.com.  The facebook fan page is located here: http://www.facebook.com/lisalarue2kx
By Creative Edge Music at 10:00 AM