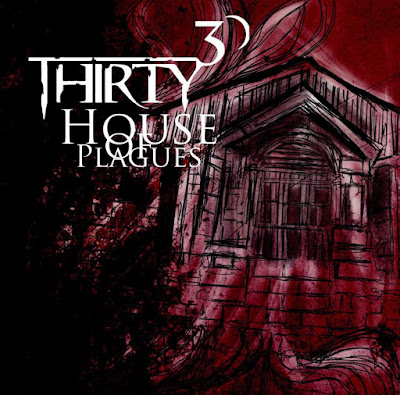 On Monday, June 1st, San Diego's 6 piece metal machine, Thirty 30, dropped a slew of grenades on the metal community when they finally revealed the release date and cover art of their long awaited album "House Of Plagues". The announcement was made on the band's Facebook page were in the post, it was revealed that their first full length album, "House Of Plagues", will be released on Friday, July 24th, 2015.

"House Of Plagues" is the follow up to their much well received 2012 Ep, "From The Fallout", and much has changed in the last three years. Thirty 30 has recruited two new vocalists (Kylan Pownell and Stacey Barnett), a new guitarist, (Albab Ahmed), and a new drummer ("From The Fallout" producer Roger Alvarez), and although Thirty 30 have performed a few times since 2012 (their last show in August '14 they shared the stage with Soulfly), Thirty 30 has been fairly dormant until now.

The Facebook post regarding the release date of "House Of Plagues" was also accompanied by a picture of the album's cover art. The artwork, which displays a house hand drawn and colored in red and white, harkens to the style of Sin City/The Dark Knight Returns creator Frank Miller. The album artwork was designed by former Thirty 30 guitarist Daen Olson.

"House Of Plagues" was produced by Michael Dobmeier, whose credits include Guns N' Roses, Serj Tankian, Nelly Furtado, The Game, and more.

"House Of Plagues", Thirty 30's first LP will be released July 24th via iTunes and their website www.officialthirty30.com.
By Creative Edge Music at 2:06 PM