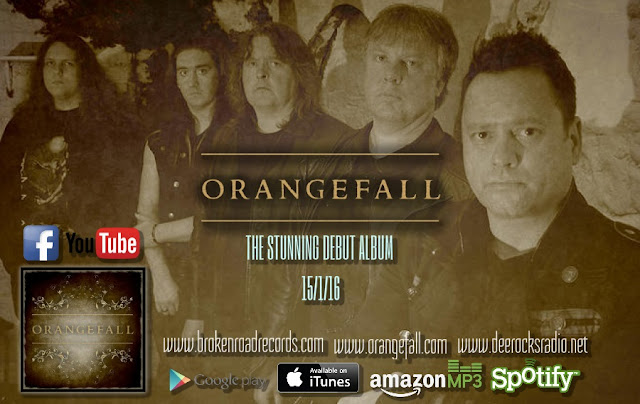 Forming in 2001, Orangefall have had a 14-year career of live shows around the UK. Now is the time for them to release the stunning debut "Orangefall" produced by Dan Angelow to the music world. Featuring the lead single "Social Vampire" "Orangefall" is released worldwide January 15, 2016.

The band who fit in to the category of melodic hard rock have been playing in and around South Wales since 2001 supporting bands such as Dr & The Medics, The Answer & Mountain.

After various line-up changed the band added Tom Williams & Matt Angelow on Drums & Bass in 2012 which created the current line-up of the band.

The past two years have seen some exciting opportunities for members of Orangefall with joining Melodic rock band “Rage of Angels” performing in Europe alongside bands such as Europe & Primal Fear.

After 14 years the band are ready to unleash the stunning debut “Orangefall” via Broken Road Records. The record featuring 11 melodic hard rock tracks at the very highest level shows that 14 years is definitely worth the wait

Orangefall will be touring the UK in January 2016 with Jupiter Falls as part of their “Revolution” UK tour. Find them on social media here:

Broken Road Records are an independent record label founded in 2015 with the solo aim of increasing the chances of independent artists being heard on a wider scale. We take great pride in the artists we have on our roster and our motto is that we only sign and release the very best in our genre. All our artists can be seen at our website www.brokenroadrecords.com
Broken Road Records LTD