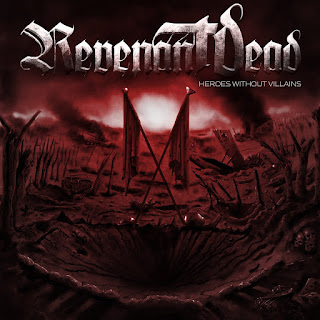 On the eve of their much anticipated 3rd album release Revenant Dead have revealed the first single from the album, The Rising Phoenix;

Based on the theme of the dichotomy of singular considerations within the mind of the individual the single speaks of the struggle faced when torn between commiting impossible tasks in the face of unstoppable forces, whilst attempting to consolidate such notions with ones own humanity.

The band have also released an incredible new lyric video to accompany the track, finding a great reception waiting for it on YouTube;

FULL BIOGRAPHY
Out from the depths of the industrial city of Birmingham (England, UK) which holds a very rich metal history, formed a group which puts their own take on the genre, bringing in modern sounds from other styles of music to the mix, such as metal, rock, industrial, and electronic music.

IRM PRESS HIGHLIGHTS
"Birminghams Newest Metal Gods"Ultimate Guitar"A promising debut from a band that clearly have massive potential..."Metal Discovery"A ripping new metal band that for sure will rip the life out of all of our ears."Rock City News"A smorgasborg of thrash, death and black metal flavors, with clean vocals manifesting from time to time"Corazine"I would highly recommend this one to anyone"Soundsheavy.net"...their songs are not only amazingly well written, but they are talented as musicians & artists..."Rock N' Roll Experience

Their second full length CD "Two Evils" again received rave reviews. The first single, "Death Spawn", is their most popular song to date, which has been fueled largely by their self made YouTube video for the single release.

TWO EVILS PRESS HIGHLIGHTS
"From start to finish you can hear the rise and fall of this albums story. The melodies In Two Evils are incredible, along with the solos and the overall mood of each song." - The Metal Magdalene"This has got to be one of the best albums released this year. " - It's Alive! Magazine"Metalheads will unite with this one that has a taste which fans of Iron Maiden to Rammstein and even Slayer and Mastodon will find appealing. It has something for all. " - Sea of Tranquility