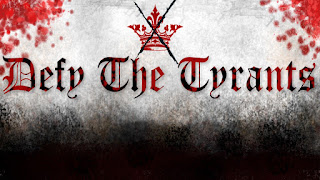 Southern California now has a new band to add to its roster of talent. Hailing from the border town of Chula Vista, CA, Defy The Tyrants have debuted the first track from their Ep, "Wrest The Crown", and it is a blistering rendition of the 90's nu-metal classic "Roots Bloody Roots" by Sepultura.

According to guitarist, Anthony Esparza, the band began in August '16 after the announcement that his previous band, Thirty 30, had disbanded. "It was a difficult time for me and honestly, I didn't even know if I wanted to continue music" says Anthony. "I had put all my energy into Thirty 30 for eight years and I was pretty hesitant to start another project, but then one day Brandon (Lobb, drums) hit me up on Facebook and asked if I was down to jam. Once we got together, we wrote like two songs in one day, which hasn't happened to me since high school (laughs)!"

Rounded out by Anthony's former Thirty 30 bandmate Alberto Lafarga (Bass), ex-Draind members Jandro Utrilla (guitar) and Brandon Lobb (drums), and ex-Within The Swarm vocalist Chris Maddox, Defy The Tyrants are currently booking for the Summer and have plans to release "Wrest The Crown" before Spring's end.

Speaking about the bands choice to release a cover song before original material, Anthony said:

"To be honest, we just wanted to put something out. Kind of like a 'We're here' kind of thing. I mean, we wouldn't have just put out anything, but we felt confident in the mix and that the style that we incorporated in the song represented us. So even though it's a cover, our sound is very similar to what was recorded. Low tuned seven stringed guitars, grooves, extreme vocals, all that."

Speaking on how Defy The Tyrants came about choosing "Roots Bloody Roots" to cover and record, Anthony stated:

""We all come from different musical backgrounds and tastes so we wanted to cover a song that kind of blended all of our interests. Sepultura and Soulfly are bands that we collectively like and are influenced by. We all threw around a couple ideas but once someone mentioned covering "Roots Bloody Roots", it was on! It's such a simple song so playing it wasn't an issue. It was trying capture the energy the original had"

When talking about the chemistry between the members of Defy The Tyrants, Anthony says:

"I've never been in a band were it's so easy to make a decision on something. I mean, it's really nice to go to practice or the studio and not have a big argument. So there's no drama. And when it comes to the songwriting, it's also very easy. Not necessarily the writing aspect of it but more how we collectively contribute. Brandon wrote a song for the Ep which sounds sick, I wrote the other three but everyone added their own flavor to the songs. Jandro has some killer leads and solos on this thing. But we have already started to write the next batch of songs and Jandro has a bigger role in those and they sound sick as hell!"

And last, Anthony states that the bands sound is much broader than the nu-metal style of "Roots Bloody Roots". He says:

"I am a huge nu-metal fan which is why I loved covering this song, but at the same time, Defy The Tyrants is not a nu-metal band. Our sound incorporates a lot of thrash, metalcore, death metal, prog metal, and obviously some by nu-metal aspects as well. Overall, we are just an aggressive metal band. This is way heavier than anything I've done in Thirty 30 but also more melodic than what Brandon and Jandro did in Draind, so there's a lot of experimenting with styles that we couldn't do in our previous bands. It's a lot of fun to write (laughs)."

Although this is the first release of music from the band, this is still a cover and we have yet to hear an original track from them. Their cover of "Roots Bloody Roots" gives us an idea of the sound of the band as well as the production of "Wrest The Crown", which the band says will be available early this summer.