Home » Discover Music » Something About Her From Mina Alali

Something About Her From Mina Alali 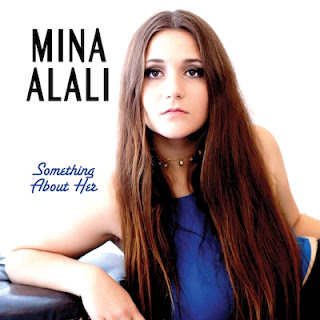 So, where do I begin? I guess the best place to start is from the beginning and stop when I get to the end. Mina Alali is a young singer going to the Berklee College of Music who not only studies how to make music, but she also made some pretty decent recordings during her time. With last year's 22 Cents Less album she woke up some folks in the entertainment industry at radio and various publications and now she's returned with a follow up record called Something About Her.

Along the way she's been invited to be a guest on to a few network television shows, made some rather well received music videos, helped the independent label she records for in California to hook up a deal with a highly respected record distributor, and she still found the time to take classes and sit for exams. Now, using the few breaks she has from her college schedule, she's out on the road doing some shows from coast to coast of the United States. And here I am getting a bit winded just thinking about it and trying to keep up with her ever evolving career.

Mina Alali (http://minaalali.com) is about to turn twenty this year so it's interesting to see where this young lady, and perhaps future diva, will end up with the release of Something About Her. There are eleven songs on this new collection. Eight of them are re-workings of some of the 22 Cents Less tunes, which if my math skills are any good would mean that the other three would be brand spanking new tunes. See how that all adds up? Okay, now we're getting down to the lowdown.

While I'm not overly excited by the title track (just a tad too tame for my taste) I did find my pulse pounding faster and my heart was palpitating when the second song, Inside Out, came up next. It was one of those from last year's record and has the bounce and pop that I felt lacking in the opening selection. Taking the tempo down a tick or two was the previously unreleased Feeling Good. Mina not only gets to show off her higher range and head voice here but also does some nicely multi-tracked and layered self harmonies (I assumed this by the tightness and sound of the lyric phrasing).

The sparkling gem on the crown of this creation rests upon the head of the Something About Her album with a little number that comes up midway in the sequence named Wake Up. Here Alali and her team turn the temperature up and take some chances that I din't hear on the other ones. It's fast and fun and Mina sounds like she's having a great time working it as she lets loose and wails away.

Mina Alali & company have the basics down pretty well with Something About Her. This is only an early outing in what may be a long audio career, so as she hones her craft further and further in the years to come I believe she could really make a go of it as recording artist. As it is at this time I'd say that it's safe to access that this venture is a solid B that leans toward a benefit of the doubt type of B+.

Article submitted by Mattie Bryan
By Creative Edge Music at 10:20 AM