Defy The Tyrants Release Single: "Oceans (Swept Away The Carrion)" 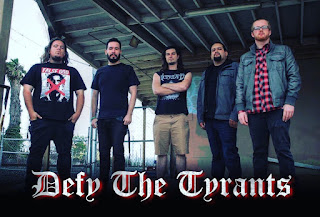 With just weeks away from the release of their upcoming Ep, "Wrest The Crown", San Diego's Defy The Tyrants have released a new track titled "Oceans (Swept Away The Carrion)", and to put it simply, it destroys.

Previously released was the bands cover of Sepultura's "Roots Bloody Roots" which incorporated seven string guitars, hardcore grooves, and the demonic screams of vocalist Chris Maddox, however the band had yet to release original material.

Now we finally get an idea of the sound of Defy The Tyrants, and this band destroys. Musically speaking, "Oceans" takes influence from the styles of Djent and Metalcore, genres that are very different from the members of Defy The Tyrants' previous bands, Draind, Within The Swarm, and Thirty 30. The track starts off with a traditional breakdown but then adds Djent style verses and a hardcore beat down section to create an overall enjoyable head banging experience.

Speaking on the writing of "Oceans", drummer Brandon Lobb said, "It was a pretty fleshed out song when Anthony brought it into the rehearsal space. I think I added some ideas as far as tempos and coming up with the break down rhythms and arrangements." He adds, "We had worked out a few songs to this point that we have parted ways with as we wrote better songs, but Oceans was really the first song that seemed to stick."When describing the music of "Oceans" in the perspective of the songwriters in Defy The Tyrants, Brandon says, "I think with this track we hit a nice mix of melody and just heavy riffs. Which, is kind of what we are going for overall on the EP (Wrest The Crown).

I think it is representative in that respect. But, I will say there are a couple tunes that really capture the Thrash Metal influences that we have. 'Oceans' is a more mid tempo groove oriented track. We have some really fast paced riffs on the rest of the EP. As a drummer, that is always fun."Talking about the lyrical content of "Oceans", vocalist Chris Maddox says, " The lyrics for 'Oceans' are pretty straight forward. I always write what comes to mind from listening to the music and it seemed fitting to write about humans impact on the planet."

Chris went deeper into the subject matter, saying "Our species acts as kings of the land and profit from it at whatever cost, even if it means destroying our only home. We utilize our ability to manipulate the environment to suit our needs and we destabilize everything in the process."Defy The Tyrants' first release, a five song Ep titled "Wrest The Crown" is due out May 29th on iTunes, Spotify, Amazon, Google Play, and more. As we close in on the release date, Defy The Tyrants have begun building a buzz to back its release and vocalist Chris Maddox has begun to describe the lyrical theme behind "Wrest The Crown" in saying, "As far as vocals and lyrics go I always like to mix things up.

Oceans is more in your face lyrically but I do demonstrate many different aspects of humanity in a much more subtle way.

Defy The Tyrants is rounded out by vocalist Chris Maddox, drummer Brandon Lobb, bassist Alberto Lafarga, and guitarists Jandro Utrilla and Anthony Esparza.You can listen to "Oceans (Swept Away The Carrion)" on YouTube here: https://youtu.be/pED40_CKVfsLookout for "Wrest The Crown" from Defy The Tyrants on May 29th.
By Creative Edge Music at 1:38 AM