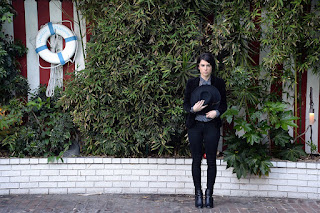 After losing a record and management deal and having her friend and producer Joel Dorn unexpectedly pass away, Mendelson needed some time away from music. Eight years to be exact. And it wasn't after some long nights spent in London isolated, lonely, and with little money, that she eventually hooked up with longtime co-writer, Steve McEwan, and came up with a series of songs that would end up on her latest release entitled Love & Murder. About the LP Leslie said, "This collection is just about the songs and my voice. That's what people can connect with. It shows where I am right now as an artist and where I want to go."

Leslie will celebrate the release of that album at the Sweetwater Music Hall in Mill Valley on May 23, and in anticipation of her performance she was kind enough to answer a few questions for us. She discussed her creative process, whether or not there are differences between East vs. West coast crowds, and why she decided to include a few covers on this album.

You recently released a new album entitled "Love and Murder," which comes eight years after your Grammy nominated debut. What took you so long?

It's amazing how time flies! A couple years after Swan Feathers came out I made another record and moved to London to work with new management. Instead of putting that record out right away I went on tour and then had a chance to go into the studio with the legendary Glyn Johns. I would have been nuts to pass that one up. We recorded at British Grove, Mark Knopfler's studio. We had recorded about 5 songs but then, unfortunately, the record was dropped. 'No hits'! At that point, I didn't know what to do.

I was still in London with very little money trying to write songs and feeling very isolated. I started writing some of the material for the new record like 'Crazy' but it was a bit too dark and weird at that time so I kept them in my back pocket. A year or so later out of the blue I got a call from Mark Howard and he asked me if I wanted to make a record. I jumped at the chance and we holed up for three days in a super cool house in Topanga canyon and made my album.

Can you tell us a little bit about the process of making it? Does anything stand out in particular?

After a few weeks sending Mark demos/voice memos, he felt like the material was very personal and wanted to keep the instrumentation to a minimum. Just me on guitar and piano with just a few other elements for color. He used A LOT of microphones at one time on me. I think I have a picture floating around somewhere where it looks as though I'm hooked up like some scientific experiment. Also, I didn't use headphones for the most part. I just sang live in the room or to the track.

In eight years, you must've had a huge catalog of songs to pick from. How did you choose the final selections to put on the album?

It was all about mood and which songs hung together the best. Before I named it 'Love and Murder', Mark kept calling it the murder ballad album. 'Murder Me' was the first thing he heard that really got him excited to make this record and it's what we based our song choices off of.

Leslie Mendelson - Photo Courtesy of Calobro Music MediaLESLIE MENDELSON – PHOTO BY MARY ELLEN MATTHEWSYou included three covers on this album. What made you want to do covers and how did you decide on those?

All the covers on the album weren't planned. The first day when Mark was getting sounds up I picked up the ukulele and just started messing around with "Just Like A Woman." It's always been one of my favorite songs and I love Nina Simone's take on it. "Cry, Cry Darlin" also came about by messing around. Neither were planned.

"Blue Bayou" was actually recorded earlier that year with Bob Weir at his studio in Marin. That collaboration came about the week that Dead & Co. started rehearsing at TRI. I had been working there a lot over that period and they made me an Artist in Residence.

While Dead & Co. was wrapping up I was hanging out in my studio and just messing around with the old Roy Orbison song. I sang it for AJ [Santella], who is Bob's guitar tech, and he said that was one of his favorite songs. Shortly after, Bob came in and sat down. He loved it and suggested that we record it in the main studio. We took our guitars, set up a couple mics and sang it live. I love the spontaneity of the track. I'm glad it found a home on my record.

You wrote a lot of songs with Steve McEwan. What's it like to work with a writing partner as opposed to just writing solo?

Once you start writing with someone as talented as Steve McEwan it's hard to go back to working alone. He's a perfect writing partner for me. He completely gets it and understands what my songs need to get them to the next level.

How did you guys meet?

In a bar in NYC. We were watching a mutual friend play in a ridiculous cover band called the Skirt Chasing Drunks.

What is influencing you at the moment?

I'm loving this documentary series on Netflix called 'Abstract.' It follows different creative professionals in their day-to-day life. I love the first one about an illustrator who designed covers for The New Yorker. He said, "amateurs wait for inspiration, professionals just go to work."

Could you briefly describe the music-making process?

That's a tough one. I don't make music, I just try to find my way in it. It's already there.

What do they like to do outside of music that contributes to your creativity?

Everything I do outside of music contributes to my creativity. I find I'm most creative when I'm doing a menial task like cleaning dishes or a long drive.

What's the last record you bought?

I'm the worst when it comes to buying records. I've been streaming Blake Mills lately. This just shamed me. I'm going to buy more records.

You're coming to the Bay Area in a few weeks. Have you played here before?

I've been coming to the Bay Area for about 4 years now. I love it and the community here is wonderful.

You're from the New York. What do you think are some of the main differences between East vs. West coast crowds?

Less weed and dancing on the east coast for my shows at least. Yet, my album release party was a riot so disregard that. I guess it depends on the music. I think when it comes to 'jam bands' it's like you're always transported to the '70s somewhere in SF no matter where you are.

For the most part, I play places where people sit but that's starting to change now that I have a band. Last gig I had a full band with backing singers and a horn section. It was so much fun.

What's your favorites song to play live and why?

I have to say that I enjoy playing most of my songs. "Murder Me" and "Crazy" and particularly enjoyable cause the band kills on those but I love singing "Blue Bayou." Those kind of classic songs are so well written that they tend to sing themselves.

How do you define the word "success" when it comes to your music?

Since I've released this record, I've noticed that everything is moving in an upward direction. My friends and fans are excited to see all the new things that I'm doing. Positivity attracts positivity. That to me is success.

Name one thing that many people don't know about you.