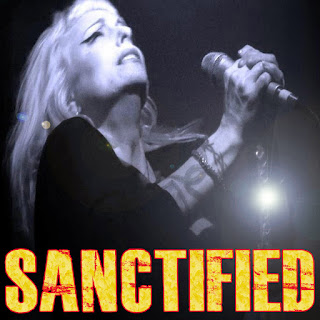 Here's the eagerly anticipated follow-up to the acclaimed "You Can't Keep A Good Woman Down", the THIRD studio album from international Roots Bluesand Americana powerhouse Low Society, SANCTIFIED. Recorded in Belgium and Memphis beginning in October of 2016.

All additional recording and mixing was finished at Memphis's historic landmark, American Recording Studio, with Will Danger behind the console. The completed album was mastered by Gebre Waddell at Stonebridge Mastering, in Memphis.Low Society is the brainchild of blues belter Mandy Lemons, winner of the 2015 Emissaries of Memphis Music Peoples Choice Award, and slide guitar phenom Sturgis Nikides, who recorded and toured with the legendary Rock & Roll Hall OfFamer, John Cale (of The Velvet Underground).

Their first two albums have garnered critical acclaim and extensive worldwide airplay, including the enthusiastic support of B.B. Kings Bluesville on Sirius XM Radio. The pair has toured non-stop since 2008, literally playing hundreds of shows on festival, juke joint and club stages across the US and Europe. They have appeared at Clarksdale Mississippi's Juke Joint Festival 5 times and NYC's Howl Festival for 3 consecutive years. After relocating from NYC to Memphis TN in 2012 they began appearing regularly on Beale Street.

Other notable appearances include the BluesaliveFestival in the Czech Republic and Poland in 2012, the Blues Foundations International Blues Challenge in 2014 and 2015 and the prestigious 2015 Lucerne Blues Festival in Switzerland."...This band, following its mistress Lemons' lead, is a feral and untethered spirit thatmakes its musical statement like the basement door slamming in the dark, off its hinges. Powerful, virtuosic and savage..."C. MICHAEL BAILEY, ALLABOUTJAZZ.COM
By Creative Edge Music at 5:08 PM