Kontakt is renowned as the best sampling instrument of all time. Its versatile, professional libraries and numerous freebies, beg the question from dumbstruck producers: how does it work? This article is an attempt to approach the world's most powerful sampler with both a programmer's and an artist's mind to understand what makes Kontakt so attractive to so many people. 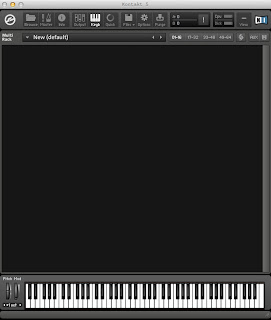 This is not a manual, but an exploration of Kontakt as both a persistent musician, and avid programmer. For the last few months, I have scoured the internet and the wild Guitar Centers of Chicago in order to write a well informed article with the extensive knowledge I have gained from researching, using, and creating with Kontakt. I have consulted MacProVideos, Youtube, numerous forums, the manual, multiple consultants at Guitar Center, and multiple music professionals in the Chicago area in order to understand the program to its fullest extent.

When the program first opens, a blank window stares back at me and, as both a musician and programmer, I am compelled to fill that void. So I search for buttons to push, knobs to twist and a keyboard to play in my first basic attempts to create noise. 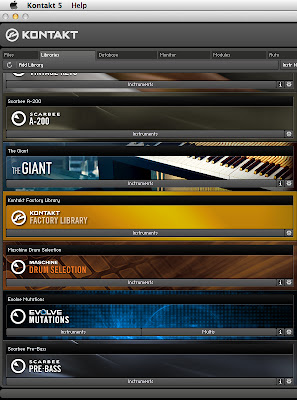 Kontakt's instruments, and multi's, or collections of instruments, are housed to the left of the void and are eagerly dragged into the dark window to populate the space with knobs, values, and options. The numerous professional samples that come with Kontakt both in the Factory Library and the expansion packs included in Komplete, are enough to push anyone's digital memory to the brink of overflowing. However, as one browses drum loops, guitar samples, string instruments, and synthesizers, one cannot help but wonder, why this one is so special to so many people. As a programmer, I was weary to install the software with its excessively large library (180 GB) It seems like any other sampler: you load in .wav, .aiff, or .rex files of various instruments, assign them to 'x' number of keys and voila! you have an instrument, but with Kontakt it is not this simple. 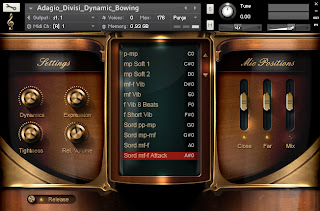 Kontakt strives, and in many cases achieves its goal of putting very humanizing elements back into samples frozen in digital time. One way this is achieved is with 'round robin sampling'. This uses multiple samples of the same note (of the same instrument) taking for granted that each time the note is played it will be slightly different. Round robin sampling uses these slight differences by allowing the programmer to cycle through each sample if 'x' note is played, and then repeated soon after. One production group that is very proud of its efforts of its deeply sampled round robin instruments is 8DIO, the maker of various orchestral instruments that many scoring artists use in their productions. One such instrument that they make is called Adagio, which is a string ensemble library. This particular library, which is actually not recognized by NI as an official library, is sampled excessively, with both close, far, and mixed channels available to tweak to the composer's liking, along with a generous number of configurations for the types of stroke the producer would like to achieve, including powerful sustains, numerous legatos, and FXed violins. Yeah, like the ones they use in the creepy scenes of movies. I have been working a lot with this instrument recently, trying to understand it's innards a little better.

I have contacted 8DIO, asking if they can shed some light on various aspects of this instrument, such as their sample organization. However, they were unable to acquiesce to my request to understand the innards of their instrument due to the licensing restrictions of their product. However, not all instruments available for Kontakt are always as professional and mysterious, but can be just as professional. 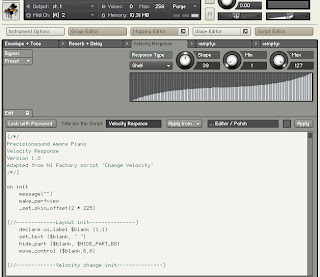 Though an unfortunate defeat, I persisted in my quest to grasp the belly of the beast, that is Kontakt, and turned my sights to other instruments such as the free Amore Piano from Precision Sound. The Amore Grand is definitely the best free piano instrument that I have found available for Kontakt and definitely up there with other pianos such as 'The Giant' from Komplete Ultimate simply because of its realism, and vast number of scripted options. As you can see, even 'free' instruments take advantage of the scripting and modulation capabilities of Kontakt to give their samples human characteristics and allow the user to personalize the available options according to their need. For example, Precision sound not only makes the piano quieter or louder with changing velocities, but also changes the brightness of the sample by applying an EQ bell around 14K hz and a low pass filter with a low 'Q' value as well. Both of these equalizing cuts are applied in proportion to the velocity received in the incoming midi note. And the user can draw in their own velocity curve according to their playing style or need.

This has allowed Precision Sound to keep the realism in their samples without adding too many actual samples for each note. While most of Kontakt's Factory Library instruments are filled with duplicate notes of varying velocities, or accessed in round robin, Precision sound only has one sample per note. This compromises on the humanization aspect that a multisampled instrument can achieve. On the other hand they manipulate the sample in such a way that keeps the quality, but allows their users to achieve a wider dynamic of playing capabilities rather than deep sampling their instrument.

The picture above is the amount of memory used by one instance of the Amore Grand. This can exceed 500 MB for many instruments, though it is usually around this for others such as synthesizers. Another very professional instrument library that I have had the pleasure of using is the LA Scoring Strings library which is possibly even more diverse than Adagio, but uses a significantly smaller memory footprint, with many instruments around 20 MB.If you program instruments yourself, you must understand the implications of this idea, which gives more people the option to create and access higher quality instruments with low RAM usage and therefore a less taxing plugin for one's processor. Don't get me wrong, if you have multiple instantiations of Kontakt running one instrument in each, you are going to run into serious issues.

Luckily, NI has worked around this problem by not only giving the user access to 16 channel input for midi, but 4 in ports, and (theoretically) an unlimited number of audio outputs. That means you can house 64 stereo instruments on their own midi channel and control/orchestrate them from a DAW, then apply native FX or plugins afterward in whatever respective channel the producer decides to send them to. Personally, I have only needed to use 8 different channels at once, but I am sure, in the near future, I am going to need a few more.

It seems that Native instruments has gone beyond the requirements of regular sampling as with Ableton's Sampler, Logic's EXS, or Xpand 2 from Digidesign with versatile scripting, round robin sampling, and group exclusion options for instrument builders. In addition to this, NI's extensive, and professional factory library, and extras that come with Komplete Ultimate, are, for the most part, worth the money. However, there are plenty of free instruments out there that are stretching the boundaries of what a company will do to create a quality instrument for its users. To conclude, I thought I would share some of those companies with free instruments so you could try their instruments yourself. I have also included a hyperlink to the Free Kontakt Player so you could start testing out instruments for yourself. And although you only get 15 minutes to search through the editable belly, of the free 500 MB instrument library, its versatility and simplicity is simply astounding.