Home » News » Get Your Boots on for Boots & Hearts in Toronto

Get Your Boots on for Boots & Hearts in Toronto

Burlington, ON may be a little out of the way for anyone who doesn’t live there, but from August 1st to 4th country-loving Torontonians flock to it for the Boots & Hearts Music Festival. This long weekend brings big Nashville names like Jason Aldean, Miranda Lambert, Rascal Flatts, Dierks Bentley, and The Band Perry within an hour of city limits. In addition to these country superstars, the lineup also includes Canadian country and other up-and-coming talent like Tim Hicks, Kira Isabella, Emerson Drive, and Dean Brody for a total of 36 bands. With music playing all day, every day, and with attendees usually wearing their country best, drinking their favorite beer, and camping each night, this is definitely Ontario’s top country experience.


Until Boots and Heart started a couple of years ago, the Havelock Jamboree and the Capital Hoedown were the top two country festivals for Ontarians. Taking place in Ottawa, the Capital Hoedown is a little far for Torontonians to travel to, so we were left with the Havelock Jamboree. While the atmosphere is similar to Boots and Hearts, this festival has tended to attract more “old country” names like Reba McIntyre and so it can also have an older crowd. While good music, it isn’t necessarily the popular country sound that has attracted many of the young urban country fans. With operations in both Peterborough and Nashville, Republic Live (the organizing company) has strong ties in both the Canadian and American country communities and, as a result, has successfully attracted bigger and more current talent that attracts a bigger and younger audience. 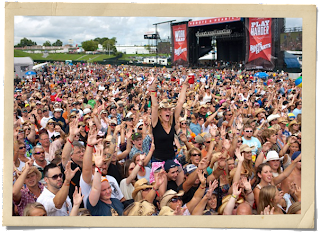 Selling out of campsites almost half a year in advance, Ontarians have been looking forward to this country-filled weekend since Christmas. With a countdown running on various radio stations and social media sites, the excitement is continually building until Wednesday, July 31st when RVs, trailers, and trucks full of ticket holders start rolling into the campgrounds. While you may have to make some new friends to bunk with, there are still a few tickets left for anyone who still wants to get their country on next week. After a long winter and a pretty rainy summer, I can’t wait for a weekend filled with sun, beer, and cowboy hats.
By Unknown at 10:00 AM